The Genealogy In Time Magazine gives us an insight into how the Google search engine works when it comes to genealogy searches. You may be surprised that as useful as that search engine is, it has some limitations.

The article also gives some advice about how to work around the problems.

Check it out at:  Google Limitations on Genealogy Searches

Posted by Peter Summers at 7:58 AM No comments:

Try these links if you possibly have ancestors buried in military cemeteries:

For military cemeteries other than Arlington:  http://gravelocator.cem.va.gov/index.html

Family History Assistance Day is scheduled for 12 noon to 4 pm at the Largo Public Library on November 9, 2013.

This popular event is held twice a year and is a great opportunity to sit one-on-one with a researcher to help you get started in exploring your family, or to tackle a knotty research problem you have been having. Just bring the research notes you have as a starting point. This is a first-come-first-served event. You do not need to be a member of the Pinellas Genealogy Society to participate, and it is free.

We also will have a class you can participate in if you have to wait for a research assistant to become available. Volunteers will also be present in the Genealogy Center to provide help with our print collection.

Join in, and spread the word.
Posted by Peter Summers at 9:49 AM No comments:

Oak Grove Cemetery dates back to 1847 and has about 33,000 burials. The database of burials is arranged alphabetically, so there is no real search form to fill out.

Scroll down the home page and you will fine links to various maps of the cemetery. Click on “Burial Records” to find the list of burials. Your next screen will give you another set of alphabetized links so you can go to the “A” surnames, “G” surnames, etc. Be aware that each letter of the alphabet has two links: one form 1800-1999 burials, and another for 2000-present burials.

Posted by Peter Summers at 8:51 AM No comments: 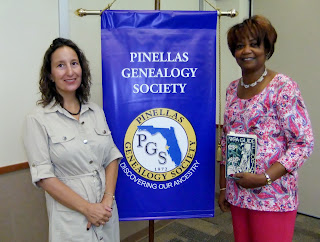 Cathy Salustri (left) presented a program at the PGS October meeting based on a 1930's WPA Writer's Project travelogue of Florida. She recounted her own travels following the 1930's book, concentrating mostly on US 19 from the northern border to its termination in that day at what is the Bay Pines VA Hospital. Vice President Harriet Thompkins (right) holds a copy of the original WPA Guide to Florida.

Cathy's preparation for her adventures and her insights during her trip hold lesson for all of us who make similar history-based trips to visit ancestral homes.

Posted by Peter Summers at 8:24 AM No comments:

Lexington Cemetery was established in 1849. The online database will allow you to search for notable people buried there, as well as a general search for any burial.

Your results will include dates of birth and death, burial date, funeral director, and interment location.

From the home page click on “Genealogy” at the top of the page and then scroll down just a bit to get to the search form.

Posted by Peter Summers at 8:45 AM No comments:

Congratulations and Thanks to Karen Fortin 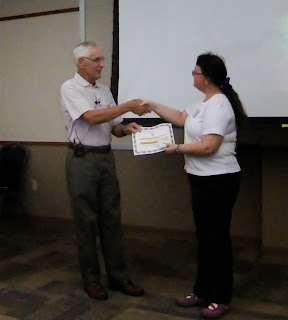 PGS member Karen Fortin was recognized at the October 2013 meeting with the Outstanding Contribution Award. Karen's contributions as a consultant in the Genealogy Center, her work on the CDROM collection, and her work to bring the Family History Repository Service on line make her deserving of the recognition and our thanks. In the picture, president David Dellinger gives a certificate and pin to Karen.
Posted by Peter Summers at 8:22 AM No comments:

The German Genealogy Group focuses, of course on German genealogy, but it s databases go beyond that single nationality and are free for anyone to search.

From the group’s home page, click on “Database Searches” on the left and then choose from a dropdown menu. The choices include births, marriages, cemetery records, church records, German enemy aliens, naturalizations, and more.

Check it out at:  The German Genealogy Group (GGG) is a not for profit organization established in early 1996...
Posted by Peter Summers at 9:43 AM No comments:

A little while ago, Crist Cowan (Ancestry.com’s “Barefoot Genealogist) published a YouTube video on dealing with your genealogy Brick Walls.

There are tips and techniques valuable to all in this video. Check it out.

Posted by Peter Summers at 12:52 PM No comments:

This article at Genealogy.com by Maureen Taylor, gives us a different spin on the old subject of online privacy and its related subject of identity theft protection.

Maureen talks to those who want to start their own family website, but what she has to say can be of use to the broader audience of everyone who publishes family information on line. She brings some balance to the competing subjects of information sharing and privacy protection.

Check it out at:  Genealogy.com: Privacy and the Family Home Page

Posted by Peter Summers at 8:57 AM No comments:

Peter Raap, of will be visiting New Port Richey.   You are invited to come and hear Peter speak about researching German ancestors.  Topics to be covered will include German privacy laws, researching German archives, history of German immigration, finding the genealogy union most likely to assist you in your search area, and time permitting, a period of translating your documents.

Ancestry.com Offers Video on The War of 1812

Ancestry.com has several databases applicable to the War of 1812 and they are discussed in a video they have posted on YouTube. If you have ancestors that may have served during that war, you may find the video helpful.

Don’t forget that PGS also presents a class on the War of 1812 that covers the same material and even goes into more detail. The video and our class certainly compliment each other. Check the class list at the PGS website to see if that class is scheduled for the near future. If it isn’t, keep checking because it will be.

Posted by Peter Summers at 8:55 AM No comments:

Family History Assistance Day is scheduled for 12 noon to 4 pm at the Largo Public Library on November 9, 2013.

This popular event is held twice a year and is a great opportunity to sit one-on-one with a researcher to help you get started in exploring your family, or to tackle a knotty research problem you have been having. Just bring the research notes you have as a starting point. This is a first-come-first-served event. You do not need to be a member of the Pinellas Genealogy Society to participate, and it is free.

We also will have a class you can participate in if you have to wait for a research assistant to become available. Volunteers will also be present in the Genealogy Center to provide help with our print collection.

Join in, and spread the word.
Posted by Peter Summers at 9:39 AM No comments:

The city of Altoona is located in central Pennsylvania in Blair County. Its county seat is Hollidaysburg. The public library there has made two indexes available online that may be of interest. One is obituaries, and the other is birth announcements.

The obits include those from 1929 to the present. The birth index includes all of the information from the newspaper announcement.

From the home page, click on the index of interest in t;he “Digital Library Resources” box on the right on the screen, or scroll down to Databases, and click on “Our Databases.”

Posted by Peter Summers at 8:35 AM No comments:

Megan Smolenyak to Speak at Pensacola

Megan Smolenyak will be the featured speaker at the West Florida Genealogical Society in Pensacola, Florida on 9 November.

The titles of her presentations are: "Right Annie, Wrong Annie," "Trace Your Roots with DNA," "Find That Obituary! Online Newspaper Research" and "Honoring Our Ancestors"

For a registration form and more information see: http://www.rootsweb.ancestry.com/~flwfgs/handouts-presentations/WFGS%202013%20Seminar-Registration%20Form.pdf
Posted by Peter Summers at 8:22 AM No comments:

On Saturday, 19 October, in the Jenkins Room of the Largo Public Library, the PGS will sponsor a unique and fascinating look at Florida and some of its history. Cathy Salustri will present Finding Florida: Revisiting the Guide to the Southernmost State.

During the Great Depression, the Federal Writers Project of the Works Progress Administration hired writers throughout the US to develop tour books for each state. The authors of Florida's book included Stetson Kennedy and Zora Neale Hurston. The book that resulted from their efforts, Florida: A Guide to the Southernmost State, captured a slice of life along Florida's roadways just before America's entry into the Second World War. This presentation relives Cathy Salustri's experience of taking "the ultimate Florida road trip" to retrace the paths followed by Huston and Kennedy more than seven decades ago.

Additionally, this year celebrates the anniversary of Juan Ponce de Leon's 1513 landing on the peninsula and naming it "La Florida." It would seem fitting to have a program celebrating Florida for a number of reasons then.

Join in at 11 am in the Jenkins Room of the Largo Public Library. The presentation is free and open to the public. Come early (10 am) and enjoy the monthly Computers in Genealogy Q&A session.
Posted by Peter Summers at 8:59 AM No comments:

GenealogyInTime Magazine offers two search engines specifically for genealogists: the Genealogy Search Engine and the Family Tree Search Engine. I have written about them before, but they deserve another look.

The Genealogy Search Engine has been enhanced in several wayS. For example, the entire Google Newspaper Archive is now included in the search. In all, the search engine says it indexes 2.7 billion records from over 1,000 websites.

The following link explains the two search engines and provides direct links to them. Check it out.  Search Over 500 Million More Records
Posted by Peter Summers at 9:36 AM No comments:

Here is the announcement from the Ancestry.com Blog:
"We are pleased to announce that Ancestry.com LLC has acquired Find A Grave, Inc., the leading online cemetery database.
"With over 100 million memorials and 75 million photos, Find A Grave has amassed an unparalleled collection of burial information. Over the past 18 years, it has grown to become an invaluable resource for genealogists, history buffs and cemetery preservationists. Find A Grave will become a wholly owned subsidiary of Ancestry.com, and will continue to be managed by its founder, Jim Tipton.
"Ancestry.com plans to bolster the resources dedicated to Find A Grave to launch a new mobile app, improve customer support, introduce an enhanced edit system for submitting updates to memorials, foreign-language support, and other site improvements."

For a more complete discussion of the acquisition and an analysis of Ancestry and others in the genealogy market, see:   http://www.genealogyintime.com/news/ancestry-buys-find-a-grave-page2.html
Posted by Peter Summers at 9:16 AM No comments:

This is a great annual event for the entire family…and PGS will have a display table there with volunteers to answer questions about genealogy and the Society.
Posted by Peter Summers at 8:37 AM No comments: