PGS in-person classes and interest groups held at the Largo Public Library have been cancelled until further notice.

We have taken this precaution with the well-being of our members, patrons, and friends in mind.

HOWEVER, WE ARE OFFERING EVENTS SUCH AS SPECIAL INTEREST GROUPS, MONTHLY PROGRAMS, AS WELL AS CLASSES AS ONLINE LIVE "MEETINGS."

This is a rapidly changing situation and we are learning as we go, so be patient. We will reach out to you using our website, this Blog, and our weekly emails to give you information on the events we are offering and the venues we will use.

Our goal is to reach out to our members and friends to provide some useful information, research assistance, and perhaps even some fun during this period of uncertainty and stress.

The program will begin at 11 AM and is free and open to the public.

13 February Meeting and Program -- with Harriet Thompkins and Patriva Mack

The program will begin at 11 AM and is free and open to the public. 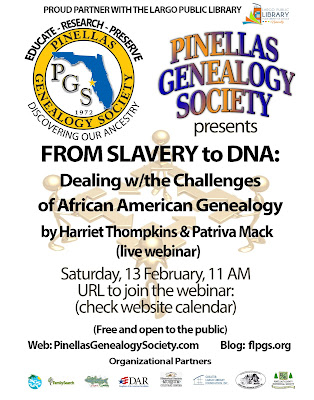 The link to register for the meeting follows:

After registering, you will receive a confirmation email with another link to use to join the event at the specified date/time.

Although the topic the month is focused on African American research, the challenges faced and the strategies developed to overcome them are applicable to all researchers. 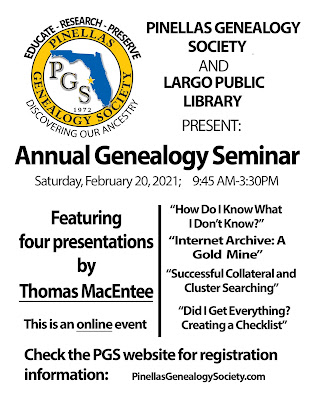 See "Seminar" tab at top of website Home Page for more information on registration and how to join the webinar.

Register by noon on Friday, 19 February to ensure you have a virtual seat and to be eligible for door prize drawings. 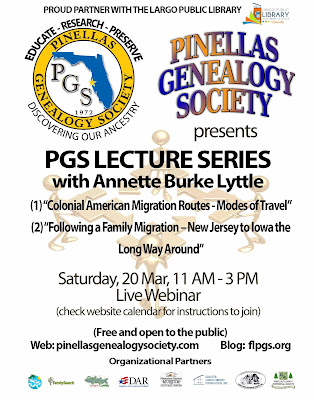 This event is a live online meeting. For more details on joining the event, see the “calendar” tab at the top of the home page.

The meeting starts at 11am, and lasts until about 3pm. There will be a short lunch break between the two presentations. Free and open to the public.

When our Colonial ancestors arrived on the shores of North America in the 1600s and 1700s, many of them very quickly began migrating west. They followed rivers and created roads into the wilderness to found new settlements on the frontier. Learn about where they traveled and how they got there, as well as how to uncover the stories of their lives.

TOPIC 2: “Following a Family Migration – New Jersey to Iowa the Long Way Around”

The Hunt family began its American story in Burlington County, New Jersey, around 1700. As with many of our ancestors, once they began to move, they covered a lot of ground. Follow them from New Jersey to Virginia, Western Pennsylvania, and on to Ohio, then moving again to Indiana, Illinois, and Iowa. Learn how to reconstruct their migrations with a variety of records.