The program for the 18 June 2016 monthly meeting of the Pinellas Genealogy Society will feature Bill Israel speaking on "Introduction to Jewish Genealogy."

The meeting takes place at 11 AM at the Largo Public Library, and is free and open to the public. Before the meeting is an hour Q&A session at 10 AM on the use of computers in Genealogy. 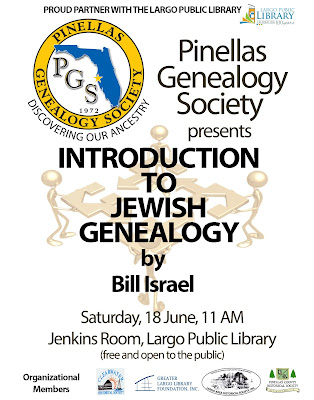 Here is a synopsis of the presentation:

This talk will focus on the unique challenges and rewards of Jewish genealogy - how it is different and often more difficult for many reasons among which are: the diaspora (the Babylonian exile from their original homeland and repeated forced dispersion of Jews from one country to another during the past 2,000 years); the changing borders of Eastern European countries from which most American Jews came; Jewish resistance to civil authority in Imperial Russia, the lack of surnames before the 18th century, the Holocaust, and name changes and spelling variations by early immigrants to America.  Bill will discuss some of the more widely used specialized research resources for Jewish genealogy, and he will illustrate his talk with examples of how he was able to discover and document his own Jewish family history.

Even if you do not have Jewish ancestry, the research challenges and techniques may reveal something that will be of value in your own research.

We are pleased to have Bill as our presenter. Here is a bit about him:

Bill Israel has spent more than 35 years researching his Jewish roots. He has traced ten generations of his family lines going back more than 200 years, and he has documented more than 3,600 family members.  He has published a 300-page hardbound book of his paternal family history.  He has been the historian for 18 Israel family reunions since they began in 1980.  Bill is a founding member of the Jewish Genealogical Society of Tampa Bay (JGSTB), and he served two terms as its president.  He served for several years on the Board of Directors of the International Association of Jewish Genealogical Societies (IAJGS) and on the boards of two IAJGS-related Special Interest Groups.  He currently serves as the Program Chairman of the JGSTB.
Posted by Peter Summers at 11:41 AM