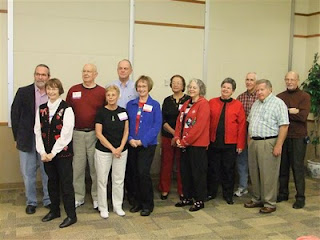 At the general meeting of the Pinellas Genealogy Society in December 2010, the annual election of officers took place. Six of the twelve board positions stood for election this year.
Shown is a picture of the board as we move into 2011. From the left, the officers are
Ed Deming--Web Master
Flo Bickel--Corresponding Secretary
Millard Russell--Vice President
Sherrie Hellrung--Projects Director
Bob Bryan--Education Director
Diane Clemmons--Membership Coordinator
Beth Shields--Treasurer
Rosemary Hayes--Recording Secretary
Sally Brown--Finance Director
David Dellinger--Journal Editor
Larry Hosmer--Seminar Director
Peter Summers--President
Congratulations to all.
Posted by Peter Summers at 12:31 PM