On 6 May at the Hospice Center on Roosevelt Boulevard in Clearwater, the Hospice held a birthday party for those who were 100 or more years old (or were close to it). The PGS was asked along with others to support that event.

We did so by providing a questionnaire that family members could use to capture some of the life events of their centenarians. A questionnaire was located at each place setting for people to complete, and were then used later in the program to introduce and tell something about each honoree.
There were about 30 guests and their families and friends which brought the total to about 120 people. It was a great event, and Deborah Hagopian, the regional program director, hopes to make it an annual event.

The picture shown here is a group shot of some of the honorees. 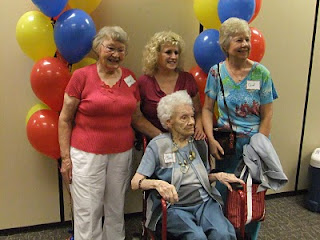 This lady deserves special mention. She is Elsie Thompson and was 111 years old in April.

I was proud to represent the PGS at this event, and I'll have several more pictures to show you at the general meeting on 15 May at the Largo Public Library.
Posted by Peter Summers at 10:29 PM